[Film] Gundam 00 -A wakening of the Trailblazer-

Spoil du film sur le forum Animesuki.
[spoiler]0. Movie starts with Setsuna et al kicking serious A Law ass. turns out its a movie Saji and a friend were watching glorifying Celestial Being and what they did for the world.

1. 2 years have passed. Something seems amiss on jupiter, a dead explorer ship comes to life.

2. Louise is still in hospital.

3. The federation is slowly reaching harmony, however there is some unsavory types still, but regardless, most is well.

4. celestial Being has not been heard off for 2 years.

5. Marina heads to the colony to get her ppl back, however the higher ups in charge aren't happy and try to assassinate her.

6. Celestial Being intervenes and save her, albeit discretely and Setsuna uses a Flag. He does not meet with Marina and says it wasn't the time.

7. Anyway we are introduced to new federation Innovator guy as the federation discovers a 130 year old Jupiter exploration heading for a crash course to Earth.

7. They send out federation Innovator and he uses a mobile armor that utilizes hundreds of Fangs to rip apart the ship.

9. Setsuna has a bad feeling, Feldt is concerned.

10. Weird things start happening on Earth, machines come to live without being operated by anyone. Vehicle accidents, train wrecks and moving on their own etc.

11. Ribbons appears in the automated house of a random girl and reaches out to her as she screams.

12. We see Federation scientists researching the half consumed body of said girl. Half her body is covered in an unknown alien metal. Billy is called in, he has a new hot girlfriend. Billy is funny.

13. They and Celestial being all deduce the same thing, the weird going ons seem to be targeting people who emit Quantum Brainwaves or have potential to awaken as Innovators.

14. Setsuna has a bad feeling again when he can't contact Allelujah and Soma. he and Lockon 2 decide to head down asap.

15. Setsuna arrives just in time to save Saji and Louise from Ribbons. Or is he? Setsuna fires multiple fatal shots at Ribbons, but he DOES NOT DIE or SAY anything. Setsuna throws C4 and blows him up and his lower body just keeps walking at him, then shortly collapses into weird metal fragments.

16. Setsuna goes WTF (as does Saji) and has a bad feeling (again). He tells Saji to seek shelter with Louise.

17. Meanwhile Allelujah and Soma stumble upon trouble. They figure out the machines where attacking them because of their quantum brainwaves. Hallelujah notices the van regenerate itself even after it was destroyed. Lockon saves them in time.

18. celestial being gathers and Setsuna says he doesn't know wtf is going on, but says he has a bad feeling, shortly after they come under attack by the presumably destroyed Jupiter Exploration ship.

19. Setsuna has a major mind rape when battling the unknown enemy and Tierra saves him. Onboard Potelomaios Tierra asks Setsuna why he didn't fight back and Setsuna says he has no idea why (again).

20. Anyway things get weird on Jupiter, its moon gets sucked into it and a mysterious fleet appear out of the eye of Jupiter.

21. celestial Being notices and Setsuna has a... oh you know this routine already. Anyway he tells Feldt to estimate how long the alien fleet will need to arrive at Earth, she reports 3 months.

22. World leaders in federation also know that and try to cover up the alien fleet incident while thinking of a plan.

23. They send out a recon fleet and their innovator pilot, and they get annihilated before Setsuna et al could save them.

24. Alien fleet is overwhelming strong in numbers and Setsuna realizes they might be trying to tell them something like the fortold Planned Dialouge by Aeola. Tiria also realises this. Setsuna releases all GN particles to try some naked body talking with aliens, only to get mind raped and goes into a coma.

25. The rest of Celestial Being try to save Setsuna but their situation gets grim.

26. Samurai Guy aka Graham saves their asses and they make a run for it. Setsuna is placed in intensive care and has reported brain damage. Feldt cries at Setsuna's plight. Everyone emos. Everyone also says how Setsuna is their only hope and needs to recover.

27. Meanwhile a big nasty ball aka the alien mother ship appears out of Jupiter and together with close to a million ships and fighters head towards Earth. Federation panics, but ultimately decides its WAR.

28. Federation bring out everything they have and form a final defense line in the front of the alien fleet.

29. They launch a volley of missiles and take out a few, but go ZOMG when the enemy deploy GN Fields.

30. All hell breaks lose. Everyone does their part. Andrei, Patrick, Graham, even Saji goes as a volunteer to hep with maintenance of space facilities.

31. Things turn grim when the enemy becomes resistant to the federation fortress' main cannon, Katie despairs but tells everyone not to give up. federation realize enemy can evolve and learn to counter their weapons.

32. Alot of people DIE. Enemy alien drones assimilate everything in their path, Federation ships, mobile suits all get absorbed. They then take their forms and gain their abilities, much to Graham's dismay. battle gets even more overwhelmingly one sided even with celestial being helping. Things look bad.

33. Setsuna is suffering, Feldt runs to this side. Setsuna has typical flashback scene and dead ppl giving him a pep talk. He sees the flower Fedlt game him years ago and grabs for it.

34. Setsuna wakes up and sees a crying Fedlt at his side, she hugs him.

35. Setsuna leaves on the Quantum Gundam. Feldt returns to bridge. She was asked why she didn't go with Setsuna, she says Setsuna heart was much bigger and a greater destiny and she had to let him go (aka she got dumped.)

36. meanwhile things are dire at the defensive line. Patrick messages katie to say goodbye as the alien metal starts to condume his mobile suit, Katie almost breaks down. just then a bream is fired at him and he breaks free. Setsuna arrives and saves Patrick's immortal ass. LULZ.

37. Everyone in celestial being power up on Setsuna's arrival and go all out. giant beams galore, beam spams, strike freedom style artillery bombing by lockon and lots of super speed and more giant beams, you get the picture.

38. Andrei dies doing kamikazi to prevent an alien ship that broke through the defensive line and heading towards Earth.

39. Setsuna needs to talk in the mothership, but even after a giant trans amed beam saber he couldn't pierce its defenses

40. Graham arrives and kamikazes himself to create a big gaping hole on Alien Mothership.

41. Setsuna and Tiera head in to the core.

42. Things are getting bad outside in the meantime, all the Cb Gundams go into Trans am. The potelimaos is infected by the Alien metal and is slowly being consumed. Nobody abandons ship, all say they trust Setsuna.

43. Setsuna connects with Alien core and he and Tiera learn of the Alien fleet, how they left their own planet after their sun turned into a red dwarf and consumed their home world. They left into the darkness of space to find a new home and along the way restored/terraformed destroyed stars with their technology and created a new home on one of them. after which, they set out into space to explore.

44. It is learned that due to their confusion after coming in contact with Human Innovators, they panicked/got confused and tried to assimilate with them to understand them, indirectly causing one big fat misunderstanding that resulted in a full out war.

45. Sestuna shares his memories and feelings and finally the alien race understood and stopped their attack. Just in tiem too as the federation Fleet, Gundams and the Potelomaios were almost consumed.

46. Setsuna and the alien race decide more understanding is required between species, and Setsuna decides to open a gateway to the alien world as humanity's ambassador. the lien fortress transforms into a giant flower-like structure in space and all hostilities cease.

47. everyone see the big space flower and goes ooooo aaaaaa. Peace on Earth.

49. Epilogue. First we go back to the past were we see a young Aeola mentioning his plan and that how it was to allow Humanity to evolve, get over their differences and how it would be a sad thing if Humanity were to go into Space and the first thing they do is start a war.

50. Back to around 50 years after peace had arrived after setsuna left for the alien world. The giant flower like structure is now Earth's new space station and the foothold for humanity's first voyage into deep space.

51. A ship, called the Sumeragi, full of awakened Innovators (including a quick glimpse of Tiera and the half metalized girl who has recovered) prepare for their maiden voyage into space. 40% of humans have become Innovators and as they were physically evolved, they were to spearhead the first voyage until the rest of Humanity evolves. (innovators also have a very long lifespan and stay physically young many times longer then normal humans)

52. We go to marina's retirement home out in the country in a field of flowers, she is playing the piano. Marina is now an old Granny and is blind.

53. She senses someone entering her room and politely asks who is it as she can't see.

54. "Marina Ismail." the voice speaks back. it is Setsuna, he has evolved above the level of a regular Innovater, his body glows a stunning white and his yellow eyes glow strongly, he looked no different as he was 50 years ago and had not aged one bit. He tells Marina how he finally came back and kept his promise, albeit it was rather roundabout for both of them. They embrace each other.

55. Outside, Setsuna's Gundam (It looks like Strike Freedom LOL) blends into the flower field, its stunning GN wings glowing in the sunlight. The end.[/spoiler] 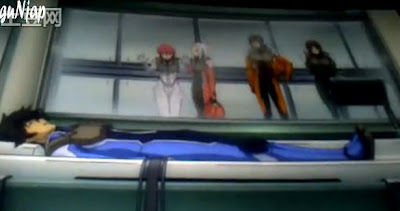 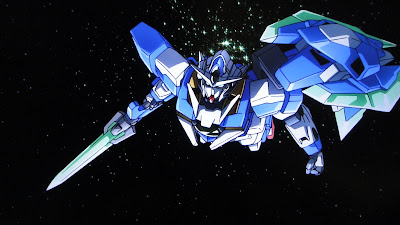